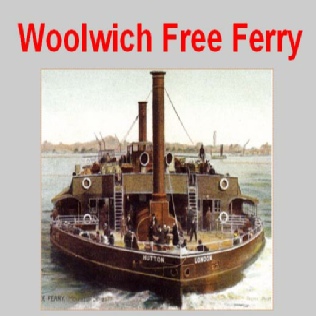 The river crossing at Woolwich possibly stems form Roman Times. It was a convenient link between Colchester and Dover.

Earliest records show a ferry business in existence during the 14C and this business changed hands many times. The boat was bought for £10 in 1308 and sold in 1340 for £66.

The right to run a ferry at Woolwich comes under the “English Law Franchises” by statue, Royal grant or prescription.

Woolwich was a small fishing village built on solid ground next to where St Mary’s church was built. This solid ground, near to the river was a useful site for a river crossing as it meant that there was no struggle across the marshy ground.

The parish of Woolwich lay on the NW side of Kent and SW side of Essex, with the Thames in between. This was possibly due to the parish groupings, the manors and parishes granted by Henry the Second and Edward the First. The northern parishes were expanded by the Abbots, apparently securing more land than they were legally entitled to.

In the 1300 the Woolwich Ferry was a Royal Ferry (in the area of Royal Eltham). Because of this connection the ferry owners tried to get Parliament to ban local rival ferries at Erith and Greenwich.

Bell Water Gate was one of several points on the river at Woolwich where Watermen had free access.

Woolwich became a Royal Dockyard under Henry the Eighth and Elizabeth the First. The Royal Arsenal was established and Woolwich grew in importance.

The “Great Harry” was built in Woolwich, the dockyard being near Henry’s “beloved” Eltham. Woolwich Dockyard became known as the “Mother Dock of England”.

To reinforce the military tradition founded by Henry, a land based armaments workshop was built near the wharf surrounding St Mary’s church and was used for testing canons and guns. Later this was taken over for the manufacture and finishing of weaponry.

This industry reinforced the need for a secure ferry crossing, especially for troop and armament movements.

In 1810 the Army ran its own ferry from the Arsenal to Duval’s point  (Galleons Reach) on the north bank. 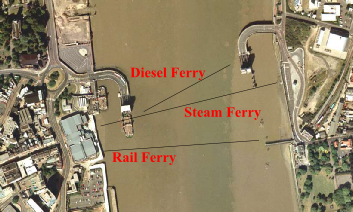 The routes of the three Woolwich ferries

Watermen were the rowers that carried passengers across the Thames in wherries, while horses and carts and animals travelled by horse ferry.

In 1811 an Act of Parliament established a ferry company at the Old Ballast Wharf opposite Chapel Hill. This ferry was near to where the Thames Barrier is today. Shareholders were the Lady of the Manor, her son, Maryon Wilson and John Long and John Stride.

Its sighting was half a mile from the centre of Woolwich and therefore not very convenient. Part of the act made it illegal (fine of £2) to convey passengers, human or otherwise, within half a mile of this ferry.

The reason for it being sited so far west was  the avoidance of marshland on the north side and the relative nearness of the New Commercial Road at Plaistow. The nearest ferry to central Woolwich was then at Warren Lane and called the Barge House Ferry.

A new esplanade and pier came into use in 1838.

The northern ferry approach was at the west end of the Victoria Gardens. 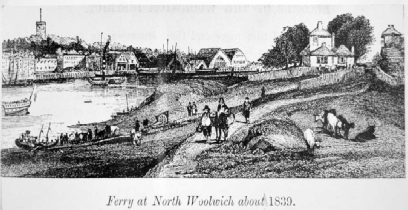 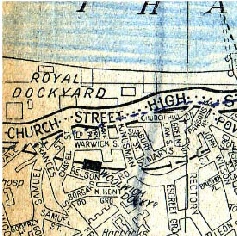