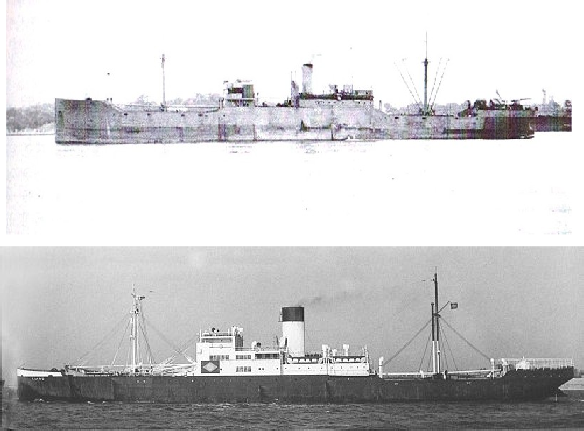 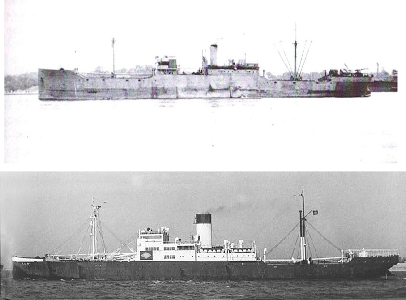 The ships shown here are the Empire Barraccuda and Cayru both of the same Type A class Hog Islanders.

The General strike from 3rd May 1926 until 12th May caused the ferry to be withdrawn.

However later that year fate dealt the ferry another blow, or actually it was the Americans. At 5-42 on a June afternoon in 1926 the Squires mate had just tied the boat up on the south shore with 400 passengers aboard when he noticed a large steamer driving an erratic course down the river towards the ferry. He gave the order to untie the ropes and full astern. The 5,032 tones US “Coahoma County” struck the ferry a crushing blow to the port bow causing the ferry to rebound off the pontoon, doing considerable damage. Had the Squires been tightly moored she would have certainly sunk with loss of life. Damage to the pontoon caused the service to be withdrawn for 6 weeks. The US Coahoma County was a Type A Hog Islander (Hull laid as  “Clauston” launched 8 October 1919, renamed Black Tern then renamed Empire Hawk and requisitioned into the Cunnard White Star fleet in 1941). She had sailed on convoys between Halifax and Scotland bringing phosphates. 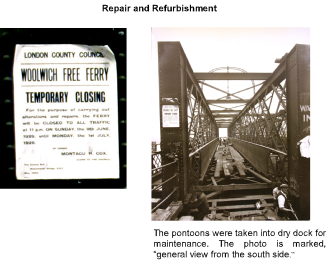 From Sunday 9th June 1929 at 11pm until 1st July the Ferry was closed for alterations and repairs to the pontoons. 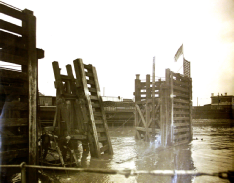 Refurbishment of the piers 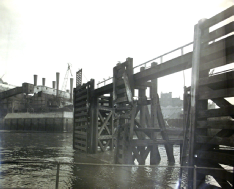 A pontoon is being dismantled for transporting to dry dock 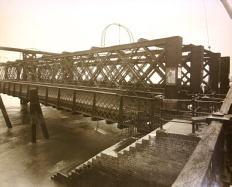 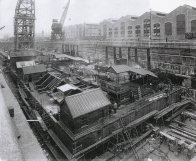 Two views within the dry dock showing the North pontoon  being refurbished, and all this work including dismantling and reconstruction happening in under two months 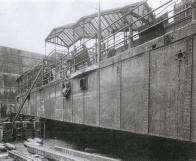 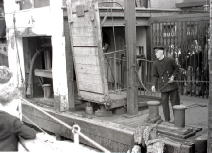 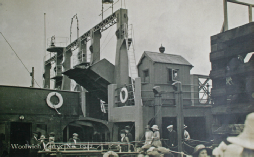 Views of the passenger ramps 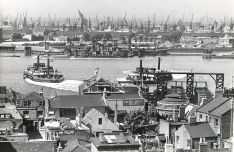 Views across to the docks.

With ever increasing traffic demands, and the appearance of longer articulated lorries, the paddle steamers became more difficult to load.

The Woolwich Chamber of Commerce had proposed a tunnel and in 1925 a W R Davidge had designed a high level bridge spanning both river and docks. The idea was not well supported and nothing came of it.

A highways Development survey in 1937 proposed a tunnel but as the proposal for a tunnel at Dartford was in the offing, this too died in 1938 when the LCC rejected the bill. They said they would await the findings of the Bressey Report on Transport, which was not supportive. The tunnel, it was said, would save £8,000 a year in maintenance costs.

Also, the LCC were told, the delay at the ferry was nothing short of scandalous and drivers would rather detour to the Blackwall tunnel than wait for a ferry. If the ferry stopped running or their was a lift breakdown in the foot tunnel, workers could be seriously delayed by the congestion in the tunnel and their jobs be put in jeopardy.  On the South side of the river a new road by passing Eltham had been built in the thirties, but traffic still had to find its way through central Woolwich via Hare Street.

Repair and refurbishment of the pontoons