Eventually, because of the fog problems, a foot tunnel was built. Formal opening was on a wet 26th October 1912 by Lord Cheylesmore, Chair of the LCC. Costing £87,000, it was 1655 ft long and 38 ft below water at low tide. The tunnelling method was that devised by the engineer Greathead for the underground railways. The free ferry was the first free crossing in the area. The Blackwall Tunnel opened in 1897 and Greenwich Foot Tunnel in 1902. 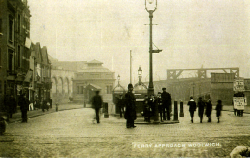 View looking down to the foot tunnel

Another view from Hare Street looking straight down to the ferry

Views of the south side tunnel entrance today

The tunnel when opened

The northern entrance to the foot tunnel, in the 1960s

The northern entrance to the foot tunnel, today 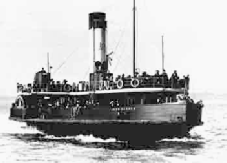 During WW1 the Arsenal employed 2 ferries for their staff, the "Red Cross" from the Port Sanitary Authority, and the "John Herron" a Wallasey Ferry from the Mersey.

The ferry service was started by the Welfare Supervision Department and it began running in mid March 1917.

It could carry 2500 passengers and was in continual service between 6-9am and 6-9 pm and every 20 minutes in between.

The next series of boats

The ferry routine went on until after World War One when a rethink came about due to capacity problems. It was decided that 4 new ferries should be ordered, on the design of the existing ones but with higher capacity.

Samuel White of Cowes built the first 2 boats of this batch. These came into service in early 1923. 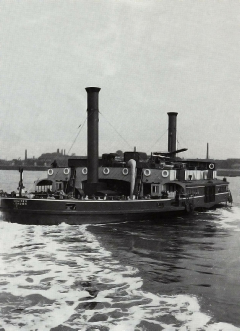 The first of these was Squires, named after William Squires, twice Mayor of Woolwich and Chair of the Woolwich Building Society.

The ferries cost £70,000 and were powered by simple diagonal units, opposed cylinders of 33”+36” with 2 gun boat boilers working at 40-50 lb pressure. They were coke fired (making use of by-products of Becton gas works).  The boats were refuelled on the move with tipper lorries shooting their loads into the bunkers from the vehicle decks.  Each ferry used about 50 tones of coke a week. (8 a day). Three ferries maintained the service with one always laid up for routine maintenance. 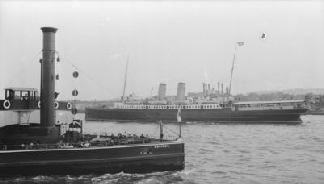 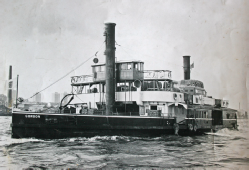 The second boat was a new Gordon identical to Squires, and built in February 1923

The new Gordon and Squires these two boats worked alongside Hutton.

Tiers-up at the bow of unknown ferry. This normally needed 4 men. 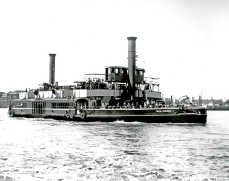 Two more ferries were ordered, these were slightly bigger and more powerful.

The other was John Benn, one of the original members of the LCC and the first Labour MP elected for Plymouth Davenport. 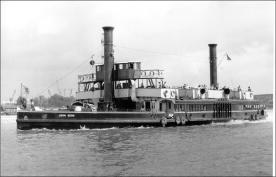 A colour photo of John Benn. 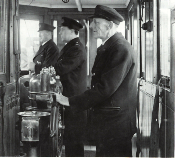 Captain, mate and boson on the wheel of a paddle steamer.