From 1850 there was pressure to have a steam ferry for horse hauled traffic and passengers across the Thames at Woolwich, but for 30 years this cry went unheeded.

Eventually plans were laid for a free ferry from Woolwich and Greenwich, only the Woolwich one being approved by Parliament.

In October 1880 a public meeting was held in Woolwich to see whether the parish could afford to set up its own steam ferry and a deputation of 60 townsfolk waited on the local board.

However the cost of building the boats and landings proved too great and representations were then made to the Metropolitan Board of Works, forerunner of the LCC and GLC. The people of Woolwich pointed out that their rates had helped to pay for the purchase and freeing up toll bridges in west and central London, and suggested that they too should be able to cross the Thames free of charge.

Original MBW Plans for the ferry 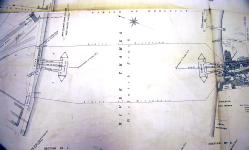 Plan of the ferry.

In 1884, after making a general survey of existing communications across the Thames, the Metropolitan Board of Works agreed to provide the Ferry, and in the "Metropolitan Board of Works (various powers act) of 1815," obtained statutory authority to ferry across the Thames at Woolwich, “Passengers, animals, vehicles and goods, free of all tolls, rates or charges”. A delay of two years occurred, while sites were being acquired.

In 1887 Mowlems were given the contract to build the approaches and Thames Ironworks constructed the pontoons. Just 2 years after, on 23rd March 1889 the Woolwich Free Ferry was opened by Lord Rosebury, Chair of the London County Council. The MBoW had been taken over by the LCC three days before.

Map of the area showing the old ferry terminal (1916) 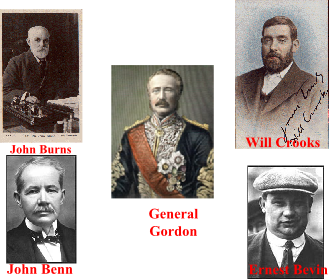 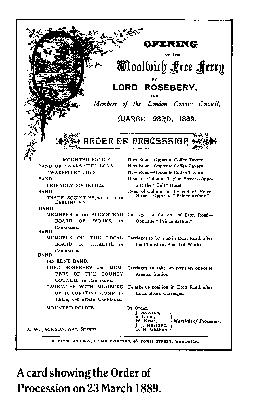 The opening ceremony took place with extraordinary rejoicing in the streets of Woolwich. Artillerymen lined the streets and processions of bands and mounted police and trade associations and friendly societies marched. Lord Rosebury drove straight from the procession onto the deck of the ferry. It was the paddle steamer Gordon navigated by a Captain Young that had the honour of taking the dignitaries across the river, where they were met by yet another procession and more celebrations 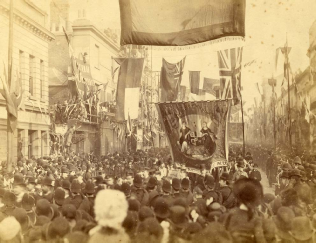 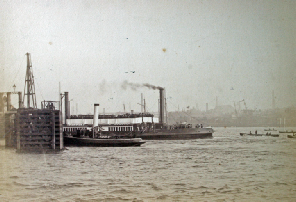 Half an hour later the party returned to the south shore where Lord Rosebury declared the Free Ferry open to a crowd of 600 people. To end the day there was a celebration dinner for 200 in the Freemasons Hall. The total cost of setting up the ferry was £191,444, 3 boats costing £45,077, pontoons  costing £15,907 and land costs of £67,081. The land acquisition figure includes the compensation for loss of income to the Watermen and Lightermen of Woolwich and to the Old Barge House Steam Ferry Company, which went into liquidation. It also paid £27,500 to the Great Eastern Railway Company. 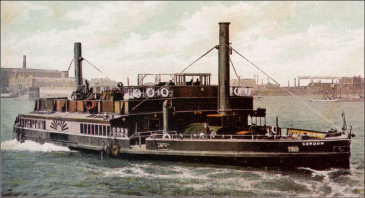 Gordon was named after General Gordon of Khartoum (1833-1885). He was born in Woolwich and studied at the Academy. It worked the first few days alone and over the first weekend carried more than 25,000 passengers. It was built by R&H Green of Millwall, was 164ft long and 42ft wide with a 4ft draught. It cost £15,000 and was 490 tones gross. The ferries were driven by 2 pairs of diagonal surface condensing engines, each being connected to one paddle. The engines were built by John Penn of Greenwich. They were capable of 8 knots and could carry 1000 passengers and had room for 15 to 20 vehicles. Hulls and funnels were painted black and the interiors umber. 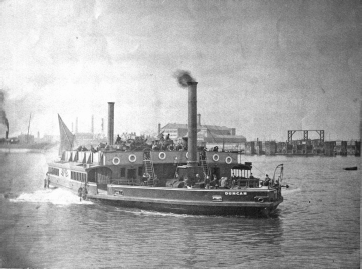 Duncan, named after Colonel Francis Duncan (1836-88) author of “The History of the Royal Artillery”, soldier and MP.

Same dimensions and cost and builder as Gordon. The bridge deck was open to the elements 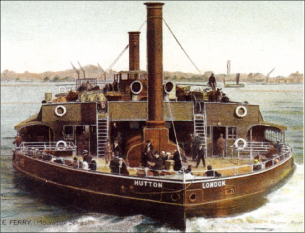 Hutton named after Sir Charles Hutton, Chair of the LCC. The ferry was built by William Simons, Renfrew. 170 ft length. Slightly longer than Gordon and Duncan. 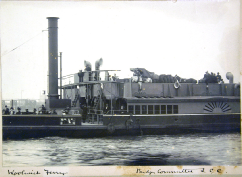 View of the vehicle deck. Its not known which ferry.

Picture of the first sailing at the opening ceremony