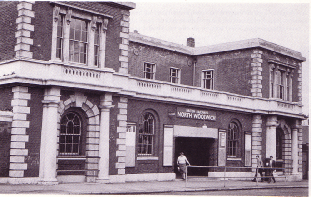 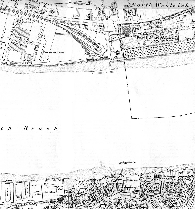 On the 14th June 1846, the Eastern Counties Railway, later to become the Great Eastern and then LNER, built a Thames Wharf goods branch on the north side of the river.

During the 1840s, 34 acres of land along the river bank at North Woolwich, owned by Westminster Abbey, was purchased by the North Woolwich Land Company, owned by George Bidder, Samuel Mortion and the Kennard family.

In 1847 the line was extended to the ferry terminal and passenger train services ran.

The line was originally owned by Bidder and was known as the Thames Junction Railway and North Woolwich Railway. It served a few poor and uninhabited houses and a tavern.

It was a desolate marshland, no one lived there and it was an area where cattle grazed. There was no reason for a railway here except the prize of Woolwich itself. To connect from the railway across the river to Woolwich they bought and run two wooden hulled passenger ferries.

The ferries ran from Roff’s Wharf, next to Bell Water Gate and near to the famous Barge House Tavern across the river 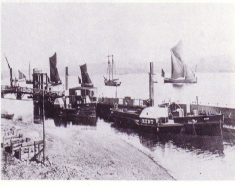 Two steam ferries, built at Barking, were used to connect with trains, they were called Essex and Kent and known as the “Penny Ferries”. They were small tug like paddle boats with wooden hulls of 65 tons gross and were 78’ by 15’, 32 HP. As they had open decks, there was no shelter for the passengers from the cold winds and rain on the Thames.

It should be noted that “South Woolwich” did not get its railway until 1849, so for a few years North Woolwich was the rail route to Woolwich and the Arsenal.

When the direct railway line was built to Woolwich, traffic using the ferries slumped. Because of the lost business, Bidder sold his line to the Eastern Counties Railway and promoted the area for housing. This failed so then he promoted the area for industry with good rail connections, Henleys Telegraph being one of the first in 1853. The development of the Royal and Albert docks brought more workers across the river.

From 1851, the railway promoted newly built gardens adjacent to the Pavilion public House. They were known as a place for amusement and dancing on the payment of money, other more famous examples being at Vauxhall, and Rosherville. Attractions were sights such as a Monster Baby show  a small menagerie, and balloon ascents with aerial feats. As the attraction waned, plans were made to turn the tea garden into a wharf, but the Duke of Westminster stepped in and raised money to turn it into the more acceptable Royal Victoria Gardens. 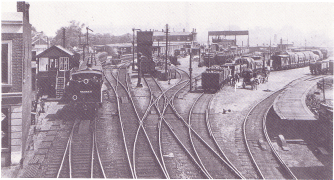 The line terminated with a small turntable, used to enable engines to move from one line to another to run round its train before its journey back, in this case to Fenchurch Street. 2-4-2 No 7244 is being turned, the driver turning the wheel, which moved the turntable.

The ferry met every train between Bishopsgate and North Woolwich and a special booking office was provided at Bishopsgate for this line.

The station at North Woolwich had a “dancing saloon” which proved very popular. The plan was to use this as an engine shed if the dancing saloon failed.

There was a train every 15 minutes. Above is a 1910 view of the station with water tower and coaling stage. A large station name board sited aloft, faced the river and could be read from Woolwich on the south side. 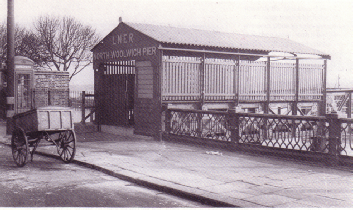 r in 1947, situated adjacent to the railway and public house.

The pier was rebuilt in 1900 and extensively repaired after WW2 bombing.

It was very busy, for apart from a ferry every 15 minutes it was visited by the Gravesend Packet Co boat for sailings to Sheerness, Southend and Margate.

The GER ferries were for foot passengers, the horse raft ferry still taking goods and livestock. From 1850 there was public pressure to supersede the horse ferry with a steam vessel, flat bottomed, that would ground on the beach.

In 1876 JH Greathead started to build a foot tunnel under the river at Woolwich but soon abandoned it.

The problems with fog meant that the workers had difficulty getting to work on time if the ferry did not run. Workers had to pay, or bribe, watermen to risk taking them across the torturous waters. Indeed this happened early one foggy October morning in 1873, the railway ferry being fogbound, eleven men and boys who worked at Beckton Gas Works and Henley's Telegraph factory paid a waterman 2d each to take them across.

The waterman’s boat struck the moored Princess Alice. (Woolwich was the Alice's normal mooring place, she was owned by the Woolwich Steamboat Co). Despite their frantic efforts to push themselves free of the saloon steamer the ebbing tide pulled them under, all lost their lives. Local people collected £777 for the bereaved families.  Workmen could lose half a days pay for being late or even dismissed. 5 years later the Alice had herself been sunk on the Thames near Woolwich, with loss of 600 lives.

By the 1880s the railway’s wooden hulled paddlers were getting old and mechanically unsound. They decided to invest in an iron hulled boat called the Middlesex. It was launched in 1879 by Thames Ironworks. She was 103 tons gross.

When the GER suspended its service in 1908 she was sold to the Thames Estuary yacht Club at Westcliffe on Sea.until 1936 when she was scrapped.

This is a picture on her last day.

She replaced Essex, with Kent carrying on, until in 1890 when she was replaced by the 148 tonne Woolwich.