The problems planning a landing stage

An intervening bridge or prow was necessary but the “Conservancy” would not allow any that had a height above 8 feet above Trinity high water. The rise and fall of the spring tide at this point is 20ft. This was the problem that led to differing schemes being put forward for the landing system.

The passengers needed, at low tide, to be raised 20ft from the boat’s deck to the shore.

One solution considered was for a hydraulic lift for one or two vehicles, but 6 or 8 of these would be needed for a 15 min service, plus there would have to be a large landing stage.

Second solution would be to bring the boats between two hydraulic rams, similar to a Victorian ship lift. The problem with this was the piers would need to go out 50ft into the Thames to cater for low tide. This would interfere with shipping.

The third, and eventual adopted solution, was the system of having a large lifting platform (landing stage) and winding drum connected with 8 to 10 heavy chains and worked by a 120hp steam engine. Duckham of Millwall Docks proposed this system and Duckham consequentially became the project engineer.

Much of the information about the ferry exists because of the booklet FE Duckham wrote after building, and the recordings in the Graphic and Engineering magazines.  See appendix.

A Jetty 100ft long, 19ft 6ins wide was supported by cast iron screw columns. Dolphins were built 42 foot out from the platform so the boats could use them to swing into the landing stage, helping to overcome the 4 knot tidal flow. Enough space was provided on this platform for both outward and in coming traffic. Outgoing traffic was loaded onto the outer lanes.

The lifting mechanism was powered by a hydraulic engine of 25hp supplied by steam from vertical boilers 4’6” diameter and 12’6” high and an accumulator with 20” ram of 20ft stroke loaded to 750sq in.

The hydraulic pressure pipes were laid to the valve house on the stage where the power was split to 4 hydraulic presses with a 12” diameter ram and 15ft stroke.

To ensure the platform lifted horizontally each of the servo rams connected with the other by rods; ensuring one cannot work without the other. This ensured synchronisation of the whole mechanism. It was important that, with four independent hydraulic rams, the platform was kept level, whatever the unevenness of load.

In case of accident or severe mechanical failure the loading platform was designed to float with 150 tones loading plus its own weight. 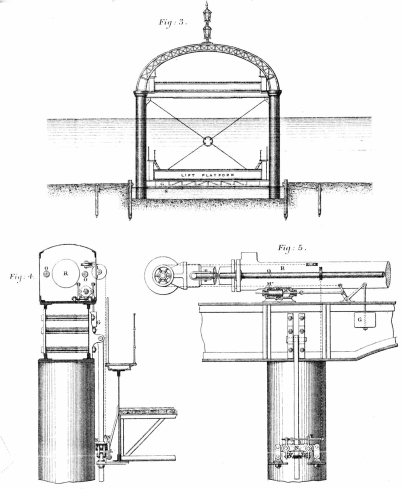 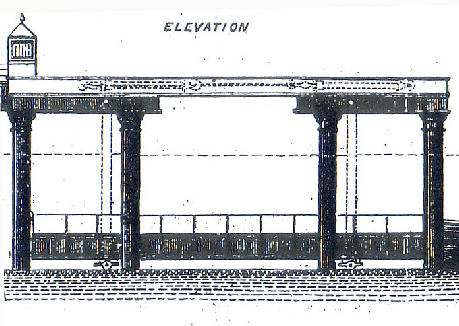 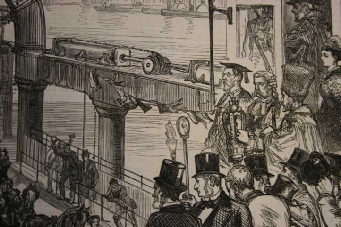 On the Wapping side warehouses were planned. The foundations for these were designed to be reinforced because of the proximity of the Thames Tunnel shafts and  disturbance of the ground was to be avoided.

A new roadway, with vaults, was built from Wapping High Street to the jetty on a gradient of 1:16. The roadway was covered in wood and granite block.

Similar arrangements prevailed on the Rotherhithe side.

The tariff for passengers 1d, for cattle 6d a head, and a cab with fare 8d (returning empty free), other vehicles 8d to 2/6d depending on the number of horses.

The ferry never was a success and subsidies were asked for from the City, even a suggestion they buy it completely.

The service became one boat only in 1879 and the whereabouts of the disposal of this ferry is unknown.

The ferry struggled on but closed completely in 1886. It did not attract the local merchants nor was it able to persuade contractors to use the ferry even though it shortened their journey by 2 miles.

One of the main reasons for its closure was was that the ferry pontoons were plagued with failure, mostly due to the unreliability of the hydraulic machinery and the complicated lifting mechanism. The ferry company also had a high mortgage of £90,000 which had to be repaid. High fares was also a factor in its unpopularity and public opinion was against the ferry.

There was also a proposal for the  building of a bridge near the Tower of London and this must have sounded the death knell for the ferry. London Bridge had also been improved in the 1870/80s. On the 25th January 1888 the Times reported that the proposal for the new Tower Bridge included the purchase of the Thames Steam Ferry rights, albeit the ferry had already closed.

Surprisingly nothing is left of the ferry, not even the huge pillars that held the platform. The riverside entrance in Wapping was warehouses then flats but in Rotherhithe the dip in the church boundary used as a turning area can still be recognised.

Very little information is archived about this ferry, and reliance on newspapers and journals of the time and the writing of F Duckham is all that seems left.