The Launching. T he first trial trip of the ferry was 29 March 1876. The boat was launched by Lord Mayor Cotton and it was apparently named Jessie May after his daughter who held the duty of swinging the bottle. 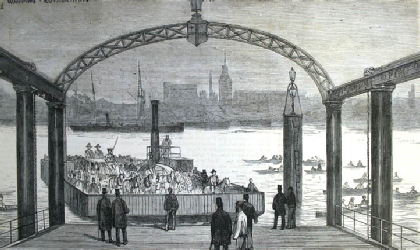 The grand opening was at 1pm on Wednesday 31st October, 1877 and the ferry sailed from  Rotherhithe taking 6 minutes to cross to Wapping. The ferry “Pearl” was used for this occasion.  The ferry carried Lord Mayor Sir Thomas White and his Carriage and on arriving at Rotherhithe, declared the ferry open. Food was then taken in a marquee. 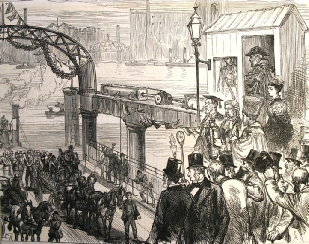 Here the Lord Mayor arrives at Wapping in the Mayoral coach to be greeted by the company officials. Who the man in the control box is uncertain. The picture does show the working mechanism of the pier.

The Approaches There was comment on how narrow the street approaches were at Wapping and that pressure should be put top remedy this. This is well exampled to day on the south shore near St Mary’s church Rotherhithe.

On the south side of the river some of the churchyard of St Mary’s Rotherhithe was not consecrated and sold to the ferry company to provide turning room for horse carts.

The plot of land was on the north east corner near an old building called the “Blue Mountains” where once stood the Bone House. 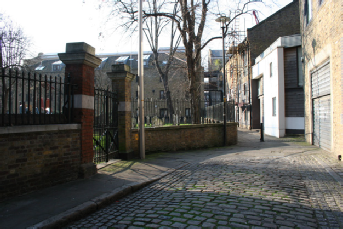 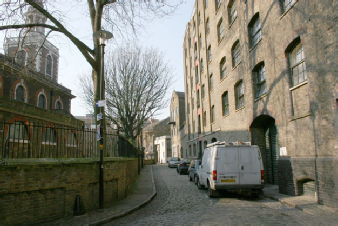 Modern day views of the approach to the ferry at Rotherhithe. It can be seen just how difficult it was to turn a horse and cart in this area.

The two iron hulled paddle boats were called the Jessy(ie) May and the Pearl and these  vessels were built at Cubbit Town by Edward and Symes,

The Jessy(ie) May was 79ft long, and had 42ft wide decks with an 8ft 9ins depth 149 tonnes and had Maudslay and Field 30hp engines. The Pear was slightly bigger. The boats looked nearly  rectangular in shape.

They had two sets of steering gear, worked from the top of each paddle box. This was in order to keep the decks clear. The funnels were placed on the sponson near the paddle boxes.

On the deck were 3 rows for vehicles and two at the sides for passengers. It could hold twelve two horse carts, maximum 50 tones.

The engine room skylights were placed between each cart track. Each end had a hinged platforms that could be raised and lowered by chains and winches.

The 30hp engines drove a pair of paddle wheels via disconnecting apparatus. This meant that one paddle wheel could be disconnected while the other wheel was still in motion. This gave the ferry excellent manoeuvrability in the river Thames.

The boat had a draught of 2’6” but were restricted  within Wapping Wharf in “low water spring”.

As the last quarter of the 1800’s approached, there was need for a crossing of the Thames below London Bridge that could carry heavy vehicles and animals as well as passengers.

This would be the first reliable eastern crossing on the Thames that used steamboats carrying vehicles. Its main supporter was the City of London.

The Thames Tunnel had opened in 1843, but because it had run out of money no approaches were built and it was used as a foot tunnel. The tunnel was converted to rail use in 1865. 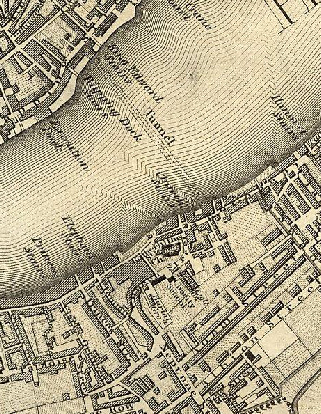 A map showing the route of the ferry from the Tunnel Wharf next to the Wapping dock stairs on the North shore to Rotherhithe Church stairs (St Mary’s). The   ferry was sited over the Thames tunnel, near to the Mayflower public house. 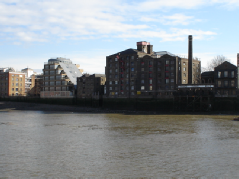 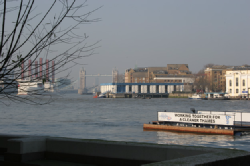 South shore site of the ferry

North shore site of the ferry

The ferry ran from the wharf next to the Wapping dock stairs called Tunnel Wharf, previously Middleton Wharf, to Rotherhithe Church Stairs (St Mary's) being sited almost directly over the Thames tunnel.

Work commenced in earnest in October 1875, the first stone being laid by the Lord Mayor of London, Alderman Stone on 11 May 1875. He travelled from All Hallows Pier to Wapping on a decorated "Princess Alice". The ferry was later to be involved with an accident in fog, at Woolwich when watermen and passengers lost their lives, and later in 1878, it sank after a collision with the collier Bywell Castle at Galleons Reach with an enormous loss of life. 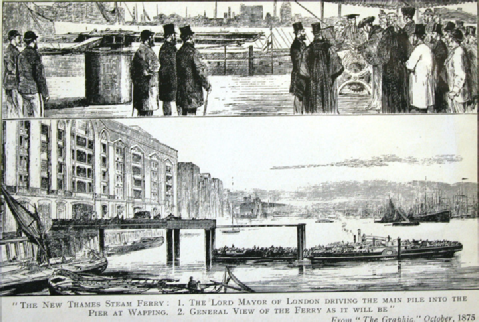 A cutting from the Graphic 1875 depicting the driving of the first pile and a view of how the ferry would eventually look. 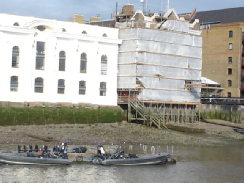 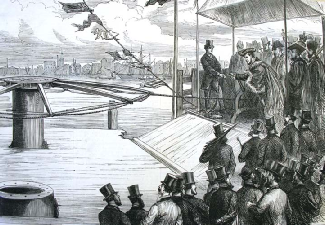 At the pile driving ceremony the Rev Cannon McCaul, the Lord Mayor’s chaplain, offered up a prayer for the Wapping Ferry. (perhaps he should have said one for the Princess Alice which was to be involved in two fatal accidents later in her life). 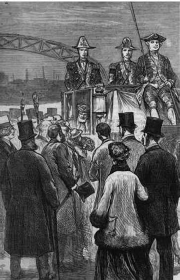 Scenes from the opening ceremony of the ferry 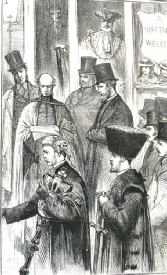