The boats had one flush deck. Machinery was placed below amidships. There were two saloons (one smoking) and one with refreshment bar lavatories, captain's cabin and store. The salons were fitted with linoleum with wood seats and was steam heated. Around the rail on deck was fitted netting to stop passengers losing parcels and um­brellas. The boats were electrically lit.

The interiors of the LCC riverboats

On the  17th June 1905 the Prince of Wales sailed the route from Westminster to Green­wich, returning by tramcar. The boat was the King Alfred built by Thames Iron Works. The Prince was given a silver model costing £75, thought extravagant at the time.

Fares tended to be lower than the competing Thames Steamboat Co, 1d against 4d for Putney to Chelsea. There were also cheap workmen's fares. There were problems with the service, second gangways were required to speed up loading. Also boys were reported spitting from bridges, and there were com­plaints that the boats exhumed  excessive black smoke. 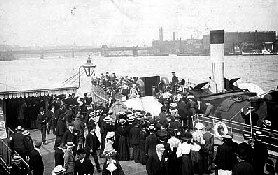 The LCC produced its own publicity including a Penny Guide and Riverboat Map. This was similar publicity to that of the excursion steamer companies. The guide listed the landmarks and gave a brief history of the buildings. 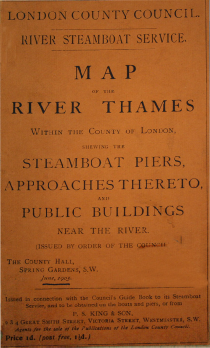 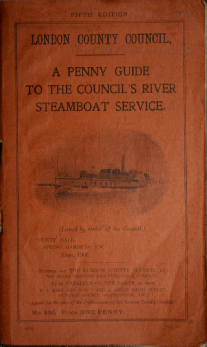 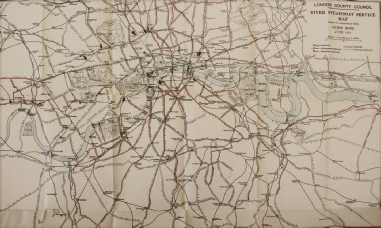 The map however did not clearly show the piers but was meant to show tram and rail interchanges.

The number of accidents, some serious, alarmed the public. The staff, including captains, were labelled incompetent, and the workforce dirty and undisciplined. The Thames Steamboat Co tried to undermine the LCC at every turn. They reduced their fares and started to run express services. London Bridge to Greenwich being just 11/2d

The LCC tried a return ticket where the return journey was by tram. Both operators were struggling to attract passengers.

The number of passengers carried in the first 3 months was 2.7 million, far short of the breakeven figure.

By the Autumn of 1905 it was decided that the winter service would be at longer in­tervals, reducing overtime and curtailing the outer destinations.

The River Committee reported that the cost of the piers, the use of private firms for boat maintenance and a lack of skilled workforce were putting costs to uncontrolla­ble levels.

In 1906 it was decided to suspend the winter service and to debate if to run a fu­ture summer service. The weather of 1907 was appall­ing and few passengers travelled. The Committee decided to abandon the ser­vice and dispose of the boats.

It is worth noting that 1907 was LCC election year and the reformers and moderates were attacked for their spending of public money on public ser­vices.

The progressive socialists were the butt of a cruel campaign by the Tories (called the Municipal Reformers) during this campaign, but on March 2nd 1907 the Tories won a majority on the LCC. 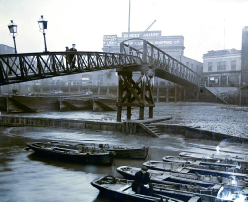 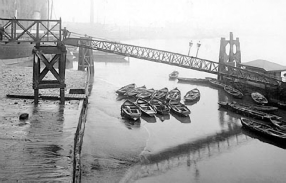 The venture was doomed from the start. There had been improvements in work­men's transport for may years, this coupled with the construction of the embank­ments in 1854, enabling the opening of the District Line in 1868. Tram and bus ser­vices were widespread and reliable. It should have been obvious that workmen and ad hoc travellers wanted to get to their destinations quickly as well as cheaply. They were not prepared to travel down to the river for transport when they could catch a bus near to their office or home. The river also tended to be cold and windy. In January 1904 the tramway between Greenwich and Westminster was electrified.

On November 1st 1907 Surrey Com­mercial; Docks was used to moor the ferries.

The boats were difficult to sell and were eventually sold for £18,204, 14 fetching just £393 each. These were bought by the new City Steamboat Co who managed to work a summer service until 1914. 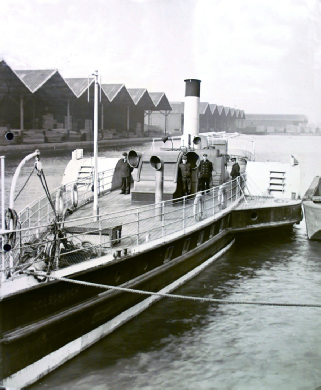 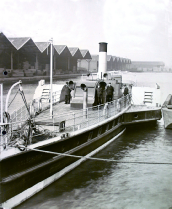 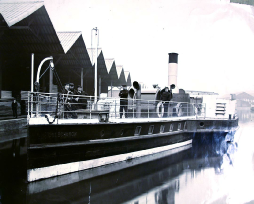 Views of Colechurch awaiting its fate in Surrey Docks

Gresham was reported as still being in existence on land in Poland into the 1990s, having been withdrawn from service in 1968.

Ben Johnson was towed to Duisburg in Germany, sailed up the Rhine to Basel, and taken overland to Lucerne in Switzerland where she lasted into the 1940s as a paddle steamer being renamed PS Rhein.

Not totally successful, she was withdrawn in 1939 and stripped out in 1946.

She re entered service in 1949 as Motor Vessel Waldstatter, screw propelled, and saw service to 1995 sailing from Lucerne. She remained as a floating hostel near to her homeport. She was scrapped at Beckenried in 2001. 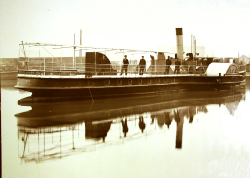 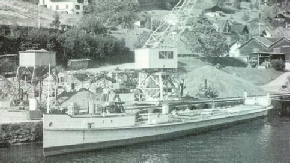 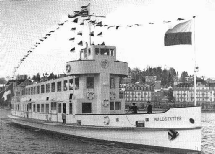