A service was established in 1905 after nearly a decade of research by the Rivers Committee of the LCC.

Research papers on this subject have pointed the finger at the progressive socialists on the LCC for the way the river service came into being, but this is not the whole truth.

The LCC wanted to put a bill to Parliament to take over all the piers and landing stages and run a riverboat service. The bill was put to a select committee who re­jected it. A further Bill was put to Parliament, together with one by the Thames Steamboat Company.

Because there was now no service on the Thames, matters needed to be resolved. Another Bill was introduced a year later. This recommended that the LCC take over the piers and the boats of the Thames Steamboat Company by arbitra­tion. The Thames Company re-presented their Bill.

A Lords select committee negated the clauses about taking over the Thames boats, but allowed negotiation for pur­chase of the piers.

The Thames River Steamboat Service Act was passed on 15th August 1904. So the situation ended up where the LCC was to run a riverboat service, the Thames Company being left in existence as a rival, sharing piers. 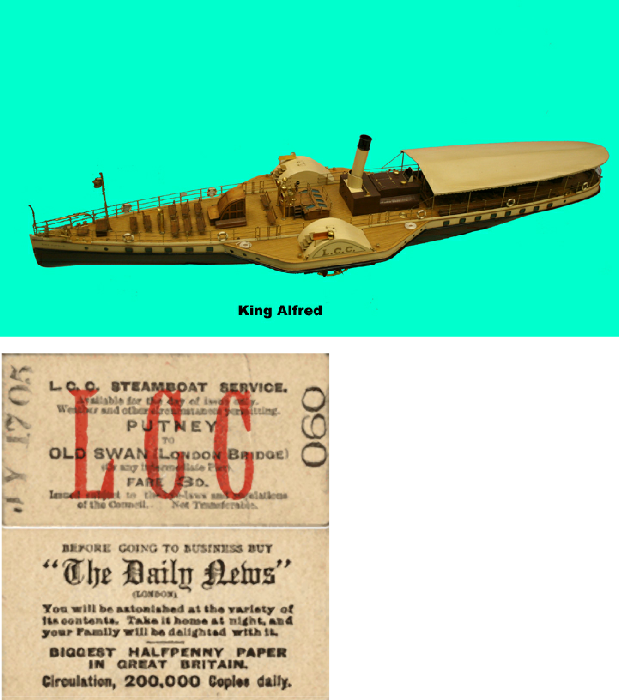 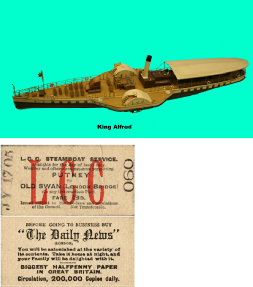 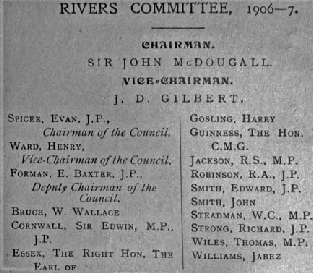 Negotiations with the Thames Steamboat Company was acrimonious. They, of course, had wanted the LCC to buy them out.

The LCC however now wanted to share pier staffing to reduce costs, but be inde­pendent of the Steamboat Company and not have to spend public money buying them out,

The original LCC plan was for a five-minute service between London Bridge and Chelsea and 15 minutes upstream to Hammersmith and downstream to Greenwich. (Woolwich was in the earlier considerations). They originally estimated that 55 boats would be needed, reduced to 40 on recalculation.

After another re-costing a final number of 30 boats was decided upon by having just a 15 minute service on the whole route between Greenwich and Hammersmith. 23 piers would be served. There would be workmen's fares and express peak hour boats, Maximum speeds of 12.5 knots could  be obtained.

Suggested fares of 1d for any distance on the central London stretch and 1d or 2d ac­cording to distance on the two extensions. Inquiries of local officials of labour societies had sug­gested that 15,400 workingmen would become daily travellers before 8am, returning after 4pm and pay­ing 1d each way.

Regarding loadings for winter traffic, no guidance was available from London experience, so they could only take the ratio of the lowest month's traffic on Paris river boats to the highest month's traffic, namely 3:5, and apply this ratio to estimated monthly sum­mer receipts, though allowing rather more than a 5% deduction to allow for stop­pages and other effects of bad weather in winter.

There was a lot of criticism of the type of boats that were proposed to be used on the Thames. Why not simi­lar boats as on the Seine? was the cry. Unlike the Seine the Thames is tidal with a strong current (4mph) and at high tide there is a small headway under some bridges; it also has a shallow depths at low water, just 3ft in some places.

Various builders of the LCC Riverboats.

Rennie built at Greenwich, as subcontractor to J I Thornycroft of Southampton (£5,950 each)

J I Thornycroft built at Southampton (£5,950 each)

All engines were Compound Diagonal by Scott of Greenock fed by two boilers. Be­cause of low bridges the funnels had to facilitate lowering.

All the riverboats were designed to be a length of 130 feet and 120 Gross Registered Tonnes. There were however small variances between builders.

Vessels built by Napier and Miller at Yoker, Glasgow and engineered by Scott 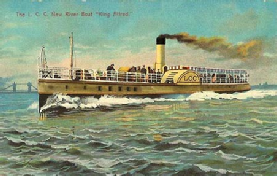 Chaucer on trials in the Clyde

Vessels built and engineered by the Thames Iron Works

Vessels built by J I Thornycroft at Southampton and engineered

by Scotts at Greenock

It is worth noting that the Thames Iron Works built 10 boats, more expensive than the others. The Chairman of the Iron Works was Arnold F Hills who owned the Thames Steamboat Company and had 36 boats of his own, which were to run in competition with the LCC.