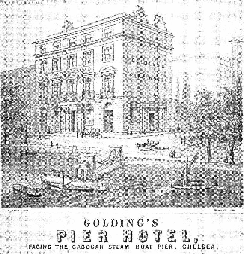 Steamboats served Chelsea from 1816 and boomed in the 1830s. Chelsea was served by the three main companies and the Chelsea Steamboat Company, formed in 1841. Eight boats travelled between Chelsea and London Bridge, giving a 15 min­ute service.

The Citizen Steamboat Company was started in 1846 with a service to Chelsea and Kew and running in competition with the Iron Steamboat Company. They later ran to piers below London Bridge and had the largest fleet on the river. The boats were iron built and had flush decks with below deck cabins fore and aft. They were painted black with large black funnels with two white bands.

They were named, or identified alphabetically, from A-S (missing I), with the City arms on the paddle box. On the inner side of the paddle box they were named after city institutions, Haberdashers, Fishmongers, Lornier, Mercer, Leather seller and Spectacle maker.

It should be mentioned that although screw propulsion had been invented it was seen as a less manoeuvrable mode of power. Paddle steamers had shallower draughts for the lower tides on the upper reaches.

The early days of the steamboats could be horrendous. The river was still an open sewer, Bazellgettte had not completed his sewer system and the Thames stank.

Two line drawings show the enormous difference Bazelgettes embank­ment made to the Thames. The river be­came much narrower and new piers meant easier landing for the fer­ries. Albert opened 1869, Victoria, 1870 and Chel­sea 1874.

In 1858 the only toll free bridges were London, Blackfriars and West­minster bridges. In 1860 coal and wine duties were transferred from the churches (they had been used to rebuild churches after the Great Fire) to buy private bridges and free up the tolls on Hungerford, Wa­terloo, Lambeth, Chel­sea, Battersea, Albert, Vauxhall, Wandsworth and Putney bridges. The embankments meant the Thames was much narrower and therefore faster flowing, this meant that existing boats were tested on the fast flowing river and any new boats had to be more powerful to keep to the timetable. 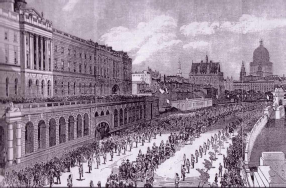 By 1865 the lower Thames sewage works at Becton and Crossness were working and the upper part of the Thames was more healthy. 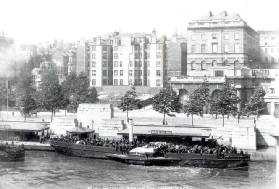 The Thistle at Waterloo Pier . She was built at Battersea for the London Steamboat Com­pany and continued in service until 1908. 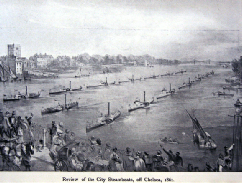 The effect of the Princess Alice disaster in 1878 suffered the Company a blow from which it did not recover. Its plant and boats were offered for sale in 1884. A new Company, the River Thames Steamboat Company, bought the boats and chief as­sets. However they could not make a profit, despite them investing £67,000 in capi­tal. The assets were offered for sale by tender but no buyer came forward. It was noted that, at this time, most passengers travelled between 10am and 4 pm with very few workmen using the service. It is important to note this fact. The main use of the river, even back at the beginning of the last century was by tourists and leisure us­ers and not factory and office workers.

In June 1886 only six boats were in service and all employees were given a weeks notice to leave. The press were outraged, but the company were adamant that no service should run and its boats were "worn out". 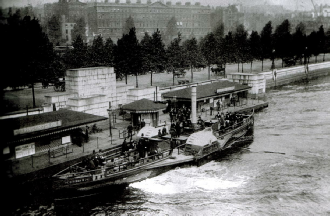 The only boats of the company which did run were the ferry from Greenwich to the Isle of Dogs (railway ferry), Port Victoria to Sheerness, and the emigrant boats from Blackwall to Gravesend.

The reasons given for the collapse was the competition between the Road Car Company and the General Omnibus Company which lowered fares to rock bottom and the penny fare from Liverpool Street to Charring Cross. The District Railway along the Embankment was dearer but much quicker than the Steamboats.

In addition to having maintain their own piers, the Thames Company had to pay £6,000 a year to use the piers belonging to Thames Conservancy. A million and a half halfpenny fares are needed to meet this expense alone.

Even at this time the trip from Greenwich to Woolwich suffered from the ills of the sewer outfall at Crossness and Beckton. Up river there was a summer shortage of water, so the boats had negotiate shallower water.

A new Bridegroom and Wedding Ring were built in 1878 to replace their namesakes of 1839 and 1844. They were used on short pier-to-pier trips.

The Bridegroom remained in service till 1900 and the Wedding Ring until 1890.

A new Cardinal Wolsey was built in 1889 and was the largest above bridge vessel and the first built of steel. She had engines built by Edward Symes and this re­mained in service until 1909.

An attempt was made to form a new company "London River Steamers Ltd" with a capital of £250,000 but it got no further than registration.

The River Thames Steamboat Company struggled on until 1890 when the surviving boats were registered under the Victoria Steamboat Association.

The Celia was owned by the River Thames Steamboat Co, which was taken over by the London Steamboat Co. She was one of the penny boats, so called because of the low fares. She was built by Armstrong Mitchell in 1885 and was 71 tones. The picture shows her on the River Ouse near Goole in the 1920s.

Victoria Steamboat Association achieved some growth in revenue until 1893, by which time it had 46 boats. This company was alleged to be a fraud with the Direc­tors drawing excessive salaries and bogus expenses. The Victoria Steamboats Limited, did run a service in 1896, and then collapsed. 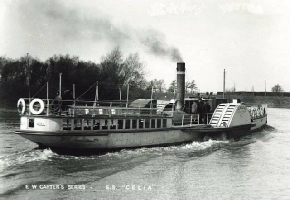 In 1897 the Thames Steamboat Company, whose chairman was Mr A. F. Hills (1847-1927), purchased part or all of the Victoria Steamboats fleet and by 1901 had added nine boats, then having a total of 36. It also took over six piers and leases of two. Hills ran the Thames Iron Works Shipbuilding and Engineering Company in Blackwall.

He hoped that the injection of new capital, allowing the purchase of new boats, plus his own zeal and efficiency, might allow his company to survive or even prosper if certain conditions were met. A service in summer could be profitable using new boats, but current handicaps to success were the pier dues and the poor condition and positioning of the piers.

If the London County Council would take over the piers from the Conservancy and lease them to the Company, the Company would raise the capital to buy ten new boats and be able to provide a good summer service. At the end of the summer, in the absence of any such measures,Hills wrote that 'I have done my best with the ser­vice for the last six months, sparing neither time nor expense to make the best of the existing fleet and to maintain a continuous and regular service for the public convenience, only to find myself at the end confronted with a very considerable fi­nancial loss — the heavy current expenses of the ordinary running, notably that of pier dues, has, in spite of every care and economy, swallowed up the profits of the Saturday, Sunday and other holiday traffic".

The Thames Company was losing £5,000 to £6,000 a year, equal to the sum they paid to the conservancy in pier tolls They proposed freeing up the piers and building some in more convenient places. If the LCC would do this they would build new boats and have a viable service. Arguments between the Thames Steamboat Com­pany and the Pier owners (the Thames Conservancy), and the LCC itself, did not encourage the LCC to do any bailing out. Services became erratic and passenger's numbers dropped. Passengers could wait 50 mins for a half hourly boat.

London Tramways Company put forward a proposal to run a steamboat service in 1895, but their shareholders did not support it. They were to use 30 boats. The Company was convinced it was a worthy scheme and that the LCC would ensure their franchise of the service. Nothing more was heard of this proposal.

By 1896 services became very erratic and unreliable. And there was general public dissatisfaction. The LCC asked its Rivers Committee in December 1894 to consider what could be done to provide London with a good steamboat service, and how to free the piers from tolls between Barnes and Woolwich.

In 1897 the Committee reported that the Council should take over the piers. In the meantime the Thames Steamboat Company had taken the assets of the Victoria Steamboat Company and was trying to provide a service.

In 1900 their service did not commence till mid June and collapsed completely three months later. Local Councils on the river pressed the LCC to take the matter up In 1901 the service went from bad to worse and on the 16th September it was dis­continued, no riverboat service ran at all in the next two years. 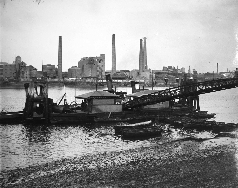 In May 1900 the River's Committee had reported that the Thames should be an ar­tery of locomotion, open to the public and "this could only be achieved by a Municipal Service". One body should be in control of piers, and boats.

In reply the Thames Company said the LCC was trying to ruin them.

Of the 28 piers the LCC owned one, Thames Conservancy 16, Thames Steamboat 5 and the rest privately owned. There was need for some new landing stages too. Pier tolls however never did cover costs of manning and mainte­nance.

Citizen B at Charing Cross Pier

An advert for the Pier Hotel in Chelsea.

Note the dwarfing of the pier and the steam­boat to enhance the size of the hotel.

Citizen S was specially adapted to run in shallow water and was ideal for upper Thames use in the summer when depths of the river was aproblem.

Travelling on the early steam­boats could be harrowing and frustrating for the passengers. The steamboat captain could change destination at a whim en route. If he saw enough passengers waiting at a pier wanting to go in the opposite direction he would change course and pick up this more lucrative payload. Hungerford Market pier was the centre of activity with barkers touting for trade. Blackwall, Green­wich and Woolwich boats ran half hourly.