Apart form the platform floating away there is a rumoured story of failure of one of the chains holding the counterweight and a diver being sent down into the cylinder to repair it. He became trapped and his body never recovered. Subsequent divers who ventured into the shafts have also found nothing. There was also a rumour that a quantity of brass was stored in the shafts in the World War Two but this has not been found either.

The site was converted into an air raid shelter in the Second World War.

Demise of the Ferry

Despite its mechanical ingenuity, the ferry was never a commercial success principally due to insufficient traffic. It closed between 1890 and 1892, then reopened and by the end of October that year traffic was said to be up to 500 vehicles and 1000 passengers weekly. It should be noted that the ferry ran a daylight service only at half hourly intervals with only the Countess of Lathom in service, meaning that the Countess of Zetland had possibly been sold off to Germany by this time.

In 1892 Greenwich ferry owners were anxious for it to be taken over by the London County Council. It is stated as not being a remunerative service at half hour frequency, but it is still a worthy public utility. It would be for sale at a moderate price.

It finally closed for good in about 1899 after less than ten years active life.

One research source states that the Countess of Lathom was sold to Southsea and Hayling Island Steam Ferry Co in 1894 and renamed Hayling. It was then sold to Nordischer Bergungs Vreein of Hamburg who converted her to a salvage vessel renamed Unterelbe.

Reporting on the opening of the Greenwich foot tunnel, the Kentish Mail describes the demise of the railway ferry . 3000 people cross and re-cross the river each day at 1d. The ferry which runs ever 20 minutes but does not run in fog, and indeed many of the ship builders on Millwall forbade their foremen and manages to live in South London because of the delays on the river due to fog.

Its costs a shilling a week to use the ferry, that is £2/12/- a year saving by using to the foot tunnel. The article finishes by saying, “what the ferry will lose in revenue I hope the public houses will not gain”.

In 1903 an extension subway was built on the northern shore to the foot tunnel to connect to the railway, this was demolished in 1970 when the road was rebuilt.

The Watermen were compensated £100 each when the foot tunnel opened. 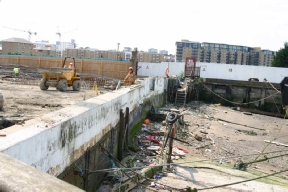 Demolition of the site in 2004 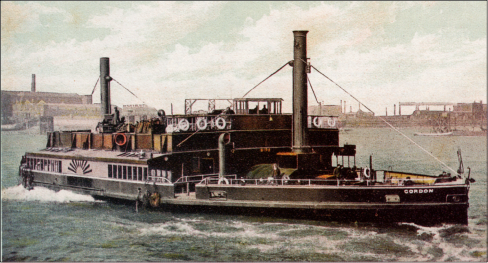 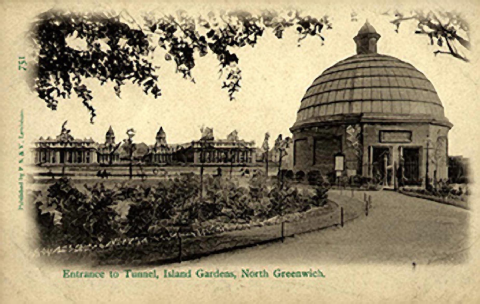 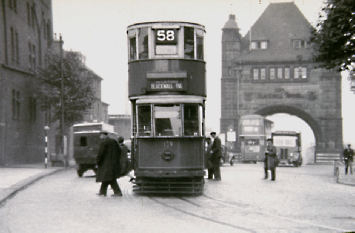 But mainly the Blackwall free road tunnel which opened to traffic in 1897.

Closure of the Milwall railway

The Millwall extension branch closed to passengers 4th May 1926 by the LNER. It is not known when the GER ferry service was terminated except that a newspaper report in 1889 stated that the Thames leisure steamer “Shamrock” was on the service, crossing in 3 minutes at a fare of 1d, against a Waterman’s 3d. (1d if there was a boat load). Although the line closed in 1926, the wooden station building and wooden platform survived in a very dilapidated state into the 1960’s but was demolished in about 1970.

With the opening of the Docklands Light Railway on 31.8.87 the terminus station at Island Gardens utilised the northern end of the North Greenwich station site.

Island Gardens was closed on the opening of the Lewisham extension on the 8th January 1999. The station was demolished shortly afterwards. 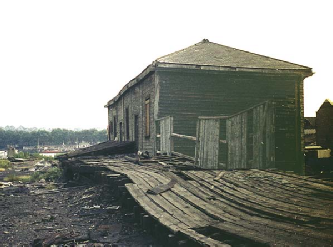 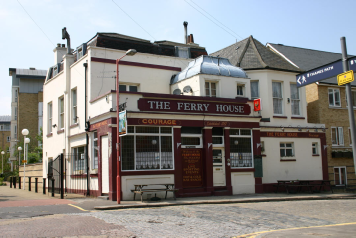 The one thing that does survive is the Ferry House Pub on the Northern Shore. 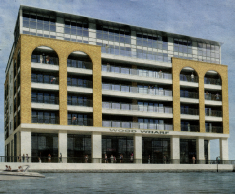