Purpose of the ferry

Because of the high rise and fall of the tide, some 20ft, and the extreme slope of the shore, embarking and disembarking was an inevitable a “wet foot” experience. The principle aim of the steam ferry was to enable a smooth transfer of passengers, horses, carriages and even railway trucks onto the ferry steamer whatever the state of the tide. The mechanics of the ferry loading would enable this.

There was a serious need for a vehicular ferry, more robust than the horse ferry, at a point up the river from Woolwich. Sir Frederick 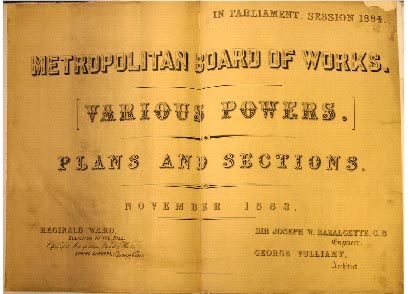 Bramwell, President of the Institute of Civil Engineers told the Metropolitan Board of Works that this was an urgent necessity, he had studied ferry practice in the USA and it was possible to achieve.

The Arsenal at Woolwich also lobbied in favour, as they had to transport munitions from Woolwich via London Bridge to Albert Dock. However by the mid 1880’s approval had been given for a Woolwich Ferry, which started in 1889.

On 26th February 1886 a proposal was approved by the Metropolitan Board Of Works, the predecessor to the London County Council.

The 13th of February 1888 saw the opening of by far the most ambitious and mechanically daring ferry operation system ever to be seen on the River Thames. This arrangement of transporting passengers from the shore to the ferry had been first employed in the USA. It was a truly remarkable testament to the ambitions of the late 19th century engineering skills.

However the completion of the works for the ferry was delayed by 3 serious setbacks. The death of the first contractor, the failure of the second and the death of the engineer 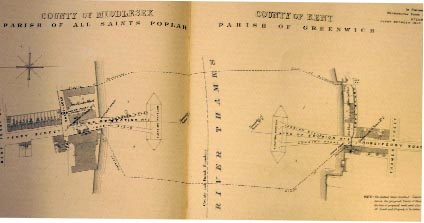 On Monday 13th of February 1888, from the works of Steward and Latham at Britannia Yard, Millwall, was launched the first of the Steam Ferries that were to ply across the waters from Greenwich to the Isle of Dogs. The ceremony was performed by Countess de la Warr (a woman’s right campaigner and suffragette), together with Admiral Sir Edward Inglefield, Chairman of the Steam Ferry Company, who died 1894, a freemason of Dury Lane Lodge.

The Boat the “Countess of Lathom” glided into the water amid cheers and the sound of Rule Britannia. A second boat was named the Countess of Zetland (this ferry apparently went to Germany at the end of its service). The ferries were named after socially aware nobility.

The ferry was officially opened on 2nd May 1889 by the Countess of Lathom although, no doubt, it had been running before that.

The engineers were Clark and Standfield, who survive as part of the Lobnitz Marine Holdings group. 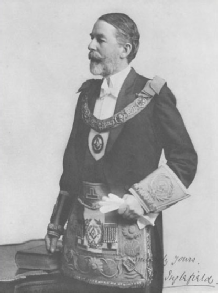 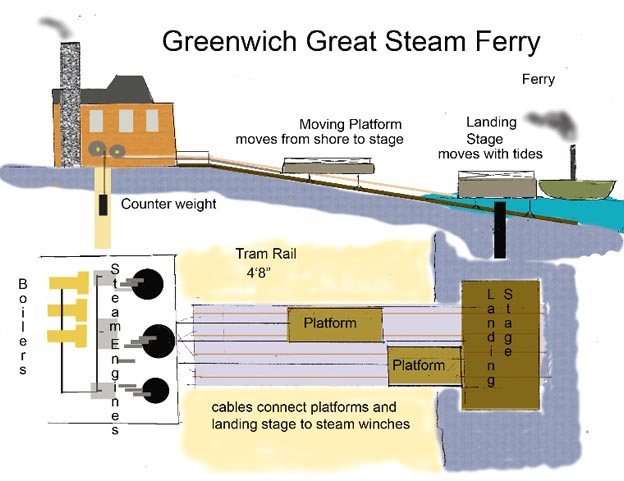 The boats were shaped like a “spoon” at both ends and were able to work to and fro with out turning. The ferry was very large for the time, 60ft x 36ft, about same size as a Woolwich ferry is today and carried 16 plus vehicles and 200 foot passengers or 1300 foot passengers. It also had provision for railway wagons. The ferries themselves were technologically very advanced being double-ended with steam driven 6ft twin screws at each end, that is 4 propellers on 4 separate engines to give manoeuvrability. The ferries had a rudder at each end.

Trimming tanks allowed the boats to be exactly aligned with the land stage. The sides or bulwarks of the ferry were hydraulically lowered to connect with the platforms. There were steering wheels at both ends and they carried 25 tonnes of coal. The  boat was powered by two sets of compound surface condensing engines of 300hp with high pressure 16.5” diameter and low pressure 33” with a 24” stroke. The boats were designed by George Skelton and the engines made by Appleby Bros of East Greenwich.

Details from the “Engineer” is as follows.

“The ferry has a 466 tons displacement, divided by bulkheads, 8 athwart the ship and 3 longitudinal, there is no keel and the size is 120ft by 40ft with a 6.5ft draught.

The deck is 60ft by 36ft and holds 1300 passengers. Each of the steamers has captain’s bridges, steering wheel and telegraphs at each end.

The motion is by two screw propellers at each end and the ships can be turned in their own length. Two sets of compound surface condensing engines of 300hp with high pressure 16.5” diameter and low pressure 33” with a 24” stroke. The cylinders are lined with cast steel liners

The propellers are 6ft diameter of cast steel with iron guards. A balance rudder of 6ft by 6ft is at each end and controlled by steam steering gear. Each ship carries 25 tones of coal.

Two more sets of engines are for air and circulating pumps and a set for the hydraulic mechanism and two pumping engines to supply the boilers with water.

The bulwarks or landing ramps are hydraulic and fed by the above machinery.”

This consisted of, on both shores, a concrete slip 350ft long and 53ft wide, which ran from the end of Horseferry Rd, down into the river. A massive landing stage weighing 270 tons, and 70ft across, travelled up and down this slip on rails with the flood and ebb of the tide. The landing stage was actually wider than the slipway and rested at tide level. To connect with the landing stage two travelling platforms transported traffic up and down.

The ferry is described in some detail in an article published in 2nd December 1892 edition of The Engineer.