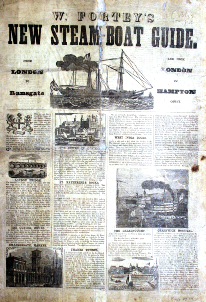 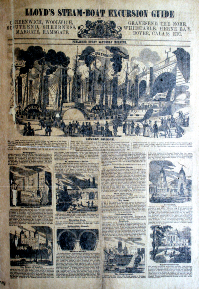 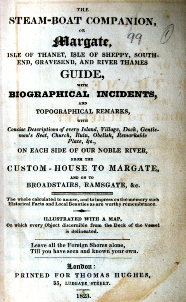 Steamboat Guides. To enhance the enjoyment of the journey, guides were given to passengers. These guides pointed out sights of interest as well as information about the company and the boats. 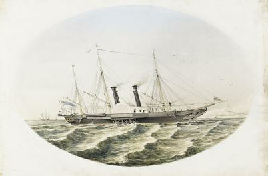 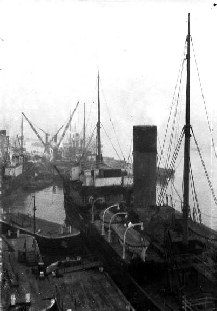 An early example of a cargo and 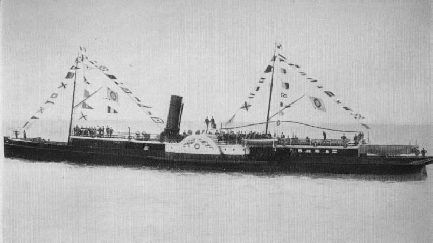 This boat was built in 1873   and had Napier engines. GRT 413 Built for the General Steam Navigation Co, and initially used on the North Kent re­sorts service. She was an innovation in being the Company's first deck saloon steamer. Boats would disembark most of their passengers at Margate or Ramsgate and would go on to Deal, then return to Ramsgate for the night. She ran this route in conjunction with Eagle and Hilda.

In 1887 she was transferred to the London to Yarmouth run and in 1898 was scrapped and replaced by the Eagle.

After 14 years without a new boat, and with the threat of increasing competition the GSN ordered 5 new boats known as the Classical Birds

They became the backbone of the GSN's services built between 1887 and 1889 and became immediate competition for the luxurious Victoria Steamboat Association's fleet which were heavy on coal and financially crippling for that company. The classical birds could do 17 knots and had compound engines. They were em­ployed on the Kent coast and a new service to Great Yarmouth. Originally they had 2 masts but later the main mast was removed. They did sterling work for 20 years before they were sold off. 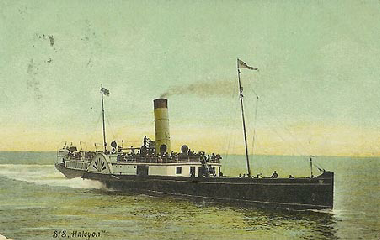 It was the GSN's first Classical Birds and went on the odd excursion trip to Bolougne.

She was withdrawn in 1904 and in 1905 went to the South of England Steam Boat Company until in 1906 when she returned to Thames.

as a riverboat on the Elbe. 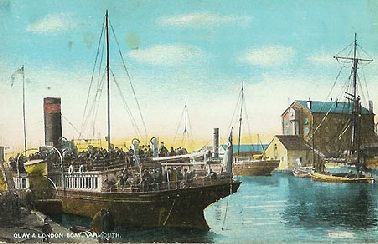 Her last trip was to Margate on 31st July 1909 when she was sold to Pockett's of Swansea for their llfracombe service and in 1915 was scrapped at Briton Ferry. 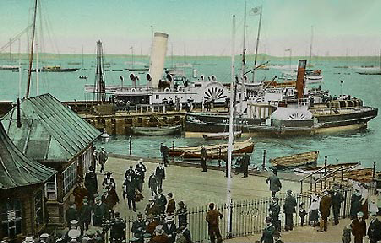 She was used on the Thames for the Great Yarmouth coast service.

In 1912 it was sold to Dutch breakers and used as a hulk.

result of enemy action in January 1915 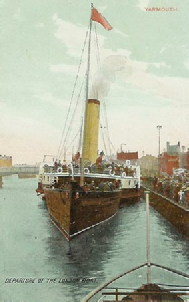 Laverock A Classical Bird built in 1889 by

Used on Thames excursions and in 1908 sold 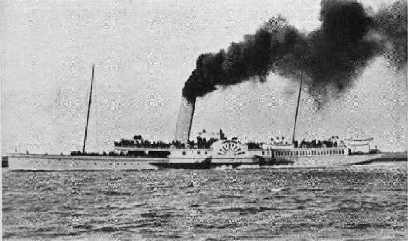 Last of the classical birds and capable of 17 knots used on the Thames-Great Yar­mouth service. In 1907 she was sold to Furness Railway for Fleetwood to Barrow (for the Lakes) service. She was scrapped at T Wards in Barrow in 1913. GSN History records the vessel as sunk by enemy action in September 1918. 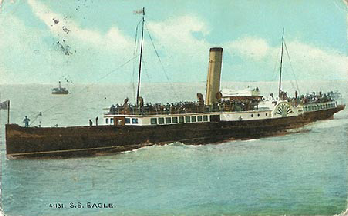 Built as a large fast vessel to rival the Belle steamers she was used on the North Kent run. In 1909 she inaugurated the Tilbury Dover service calling at Southend, Margate, Ramsgate and Deal. A Committee of Enquiry was set up after complaints of overcrowding on the Eagle. The ticket collector was dismissed and the Captain censured. In WW1 the Eagle was used as a minesweeper and returned to the Thames but was withdrawn without being used.

In 1928 she went to the Netherlands and used as a landing stage on the river Maas above Dordrecht. 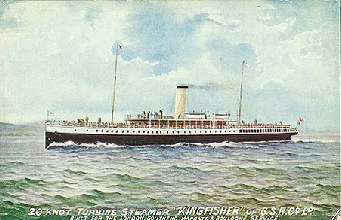 Although not a paddle steamer, Kingfisher was did prove that in the Thames the ma­noeuvrability of paddle steamers made them ideal.

This was the General Steam Navigation's first experiment with a steam turbine, and she could do 21 knots, very fast at the time.

Because of turbine screw success on the Clyde it was tried on the Thames. The Kingfisher ran on the North Kent route and across the channel. It was reported to handle badly in the shallower waters of the upper reaches of the Thames and had an excessive wash. There were many damage claims from smaller boats that the wash had done damage. She was also difficult to manoeuvre at piers, compared with the ease of paddlers.

She was luxurious and had 2 decks a promenade and a salon deck. After 6 seasons she was sold in 1912 to Trieste Italy named Venezia and sold on again in 1913 to the China New Era Shipping Company and scrapped in Hong Kong in 1928. After this unsuccessful experiment with a turbine steamer GSN reverted to paddlers in 1909 with three "Eagle" steamers built between 1909 and 1932.