The Thames Excursion and Pleasure Boats

The history of the Thames paddle steamers that transported millions of holiday-makers and trippers to coastal resorts can be traced back to the 1820s and it devel­oped up to the 1930s.

Originally the travelling passenger shared the trip with animals and cargo. Passen­ger traffic developed in the mid-19th century as a growing city population looked to take their holidays in the resorts developing on the north and south banks of the Thames estuary, in Essex and Kent.

The early mixed traffic boats did have cabins but they were often shared with drunks or smelt badly of vomit. Indeed even on the winter night boats, some passengers preferred to sleep in chairs on deck with a blanket for warmth. It was not until 1868 that the General Steam Navigation Company brought in an exclusively passenger only boat.

Packet steamers also plied longer routes such as up the east coast to Great Yar­mouth and across the English Channel to French and Belgian ports. By the time the 1871 Bank Holiday Act had come into force, the day trip and long weekend were well established. Because these services were mainly summer only they were often known as butterfly boats.

So how did it all start? In the summer of 1815, an entrepreneur, Mr. George Dodd, purchased and fitted up a vessel at Glasgow, and brought it to London by its own steam power in just over 5 days.

This 63 ft vessel was built in 1814 by Wm Denny of Dumbarton, and was formerly employed on the Firth of Forth. It was called the PS Margery. It was the first Thames steamer, which was capable of long distances and began plying between Graves-end and London. At Gravesend passengers were transferred to the shore by rowing boat. The Margery lasted one year on the Thames.

In 1833 Messrs Jones and Windsor chartered the new paddler Albion for a trip to the Nore sandbanks and light ship where passengers could see the scientific and artistic sites as the Thames Tunnel, Greenwich Hospital, Woolwich Dockyard Gravesend Pier and fisheries and Tilbury Fort where Queen Elizabeth 1st addressed her patriotic army. 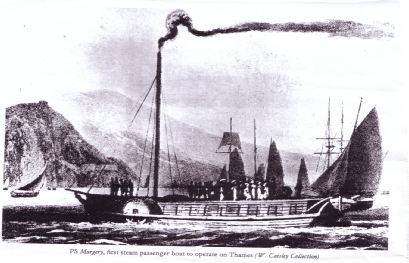 Although steam had been plying the Thames down to Gravesend from 1815, the last tilt boat, the Duke of York, was withdrawn in 1834. These were large rowing boats that sailed down to Gravesend and named after the tilt or awning that protected pas­sengers and cargo.

Omitting companies which did not go beyond Woolwich

There were three main companies, which dominated the excursion trade.

They took over Waterman's Steam Package Co in 1876 and became the London Steamboat Co until 1888 .

The boats were taken over by the Victoria Steamboat Association who had a sub­sidiary New Palace Steamers (survived with 3 steamers from 1896).

3)  The London Woolwich and Clacton Steamboat Co was formed in 1887 sur­vived to 1896. It was formed when the Woolwich Steam Package Co curtailed its service to Clacton. Known as Belle Steamers from 1896.

PS Queen of Southend (to 1939 - not reconditioned after war)

PS Essex Queen (to 1939 - sold after release from wartime duty)

The General Steam Navigation Co had worldwide shipping interests but also great strength on the Kent and France / Belgium routes and they operated traditional ex­cursions from London until the end of the 1966 season. It was absorbed into the shipping conglomerate P&O in 1920 but continued under the GSN name. P&O con­tinues to provide car ferry services between the U.K and France, one of the speciali­ties of the GSN Company. They are now owned by Dubai Ports World, but still trade under the P&O name.

In 1825 they had four paddle steamer excursion boats, City of London, Royal Sov­ereign, built by GSN joint owner and wood yard owner Brocklebank at Deptford, plus the Earl of Liverpool and Lord Melville. In 1843 their paddle steamer Trident (scrapped late 1880s) took the Queen and Prince Albert from Scotland to London. The GSN was always a diversified shipping operation with deep sea interests as well as its excursion business in the Thames Estuary. This led to a financial stability which allowed it to outlast its competitors, although for short periods of time other Companies were able to outclass it with their newer vessels.

They came to dominate the excursion trade on the Essex and north Kent coasts. In 1937, the GSN effectively took over the New Medway Steam Packet Company, which had become its major competitor after the First World War and the two fleets, whilst nominally independent, were thereafter operated in association with each other.

The 1930s saw the introduction of a number of large pleasure steamers (although diesel power became the chosen method of propulsion). Despite severe wartime losses, the GSN provided services very much as throughout the previous years until the end of 1966, when it was announced that they were withdrawing from the trade. 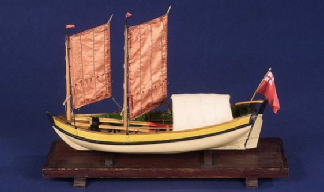 A model of a tilt boat